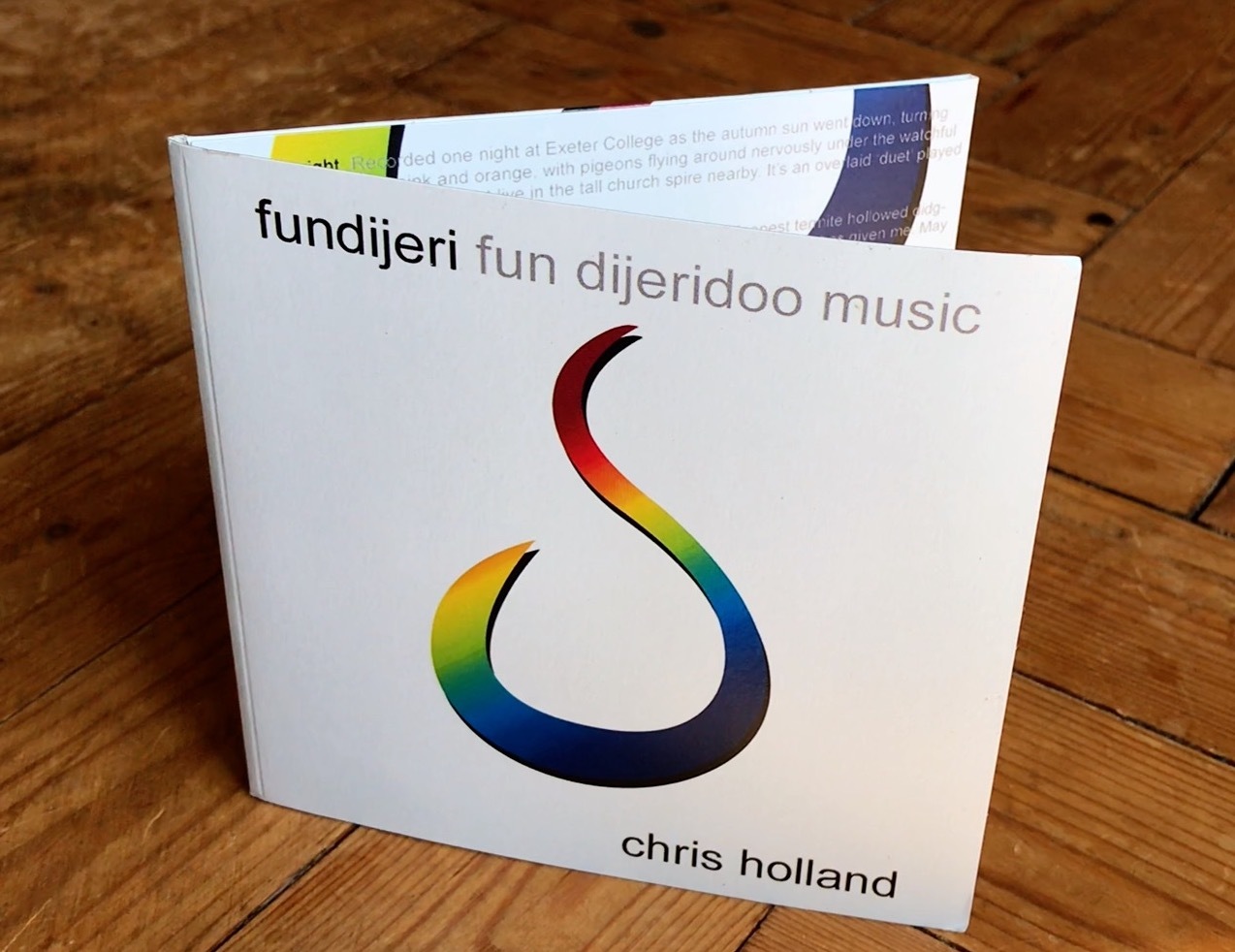 It's over an hour long. Some of the tracks were recorded in Kangaroo Valley, Australia, others in Surrey and Exeter, England

I am inspired by natural sounds, rhythms and landscapes... also the sacred.

Here you will find a mixture of music influenced by various stimuli including a cranky cement mixer, the beautiful call of the Australian Magpie, the deep earth and daydreaming while cleaning your teeth.

I hope you enjoy it.

Scroll down to get the free track!

It was difficult to choose a track to let you listen to for free... but in the end I chose the upbeat Tea's Up! It's a layered track based on the rhythm of an old cement mixer... and was a lot of fun making. Hence fun-didgeridoo-music or Fundijeri!

01 Watamola Mountain Wander - sounds of the Australian Bush near Kangaroo Valley. Mark Bugden on one of his homemade Kalimbas, myself playing a Charlie McMahon didgeridoo and various bits of percussion played by Mark and me.

02 Night Creatures and Sunrise - a thanksgiving piece celebrating the circle of life, inspired by a dreamtime tale about why Kookaburras wake up the sun every morning.

03 Strike of the Hoover Snake - A low swirly piece I played on a vacuum cleaner tube while Mark Bugden whirled the end of the tube around two mics placed the same distance apart as two ears. Mark added the keyboard afterwards. Best listened to with headphones

04 Magpie - recorded in Australia. Three intertwining didgeridoo pieces create this piece. Aussie Magpies have a song that really reminds me of the bush, views from mountains, the scent of eucalyptus and the magic of the etherial unknown.

05 Around the Aga on a Stormy Night - Fascinated by the strangely comforting, gurgley sound of of a big old oil fired Aga I waited for a stormy night to record this two part piece. Adding to the atmosphere was my baby daughter breast-feeding nearby, the fridge humming and clicking, and a thorny briar rose scraping on the pane of the kitchen window as a plane coming into Heathrow passed overhead.

06 Tea's UP! Starting a cement mixer borrowed from a friend I was struck by the rhythm made as the drum rotated. So I recorded it and used it as the base for the track. I also played a lump hammer, bolster chisel, a couple of bricks, a cheap Casio keyboard and asked a site labourer from London, called Vince, to call out "tea's Up!"

07 Later that night - two layers of Didge recorded one night at Exeter College as I watched the Autumn sun going down turning small whips clouds pink and orange and pigeons flew around nervously under the watchful eyes of a pair of peregrine falcons living in a church spire nearby.

08 - To the centre of the earth - a thanksgiving journey played on the deepest termite hollowed yidaki, (Aboriginal Australian didgeridoo) I had at the time. This track says "Cheers and thanks!" to the Earth for all that it gives us and the air that sustains us with every breath.

09 Bathroom Dreamtime - attempts to capture a certain bathroom dreamtime feeling. Have you ever drifted off into dreamland while cleaning your teeth an noticed how the sound feels in your head? Or maybe drifted off into nothingness as you gaze into the mirror at the end of a long day and wondered what am I looking at? Or maybe even lost yourself in the ripples in the bathwater as you swirl the water around to mix it andnobiced the fine drops of mist rising from it's surface? This track blends many sounds recorded in one bathroom - The door gives the drumbeat, I did clean my teeth for that long, my young daughter shrieks away in the bath a few times, a pipe going up to the shower head was played with a wire drum brush and to finish, the microphone was almost shoved down the plughole to record the sound of the last of the water draining from the bath.

10 Late night jam - recorded in a large barn with Chris, Matt and Jackie from a band I played in, Jabberwocky.

HI, Chris Holland here...  I am a passionate and playful outdoor educator, storyteller and musician.

This site is the home of my digital media, products & courses for nature connection & creative, playful outdoor education.

Get product updates, course dates, launch info, and special deals by signing up for my newsletter now.

I  love my world is my best selling, playful, hands-on nature connection guidebook that Michael Morpurgo said is "a must for all".
You're signing up to receive emails from Chris Holland
Welcome!
Enter your info below to login.
Forgot your password?